Every online forum where young women congregate has lots of posts about pregnancy-anxiety. “Hi ladies, bit of a problem here. I looked at my guy-friend’s sperm applicator, and now I’m terrified. I don’t think I got any sperm too close to my vagina, but all it takes is one. DO YOU THINK I COULD BE PREGNANT?  That’s be a disaster. What do I do?”

Another women will respond, “How long has it been? YOU CAN GO GET PLAN B!”

“Plan B” is a drug that the FDA has approved as a post-coital contraceptive. In theory it works by disrupting ovulation, using a large dose of the fake hormone Levonorgestrel. Sperm can live in the female reproductive system for 4-5 days before ovulation, so by preventing ovulation the hypothetical pregnancy can by averted.

This product is sold in most pharmacies as Plan B One-Step. The retail price of this drug is $50. A generic version is also available for $40. If you look past ‘marketing to fear’, even $40 for the generic is still price-gouging.

Most women have no idea where they’re at in their monthly cycle. A woman who races to the pharmacy to buy Plan B, but who actually ovulated the week before, has no possibility of pregnancy, and is wasting $50. A woman who does not have a follicle that will release an egg in the next 4-5 days is also wasting her money on a worthless pill.

But this isn’t what the reviews say. “Took plan B, not pregnant. Hooray, A++, 5-stars, would take again!” Much less common are the other testimonials: “took Plan B, got pregnant anyways…”

If these drugs were priced fairly, what would they cost?

I haven’t found a price for levonorgestrel powder, though there are plenty of Indian and Chinese chemical companies offering price quotes. This drug is structurally-similar to Progesterone USP, a manufactured version of the human steroid that is sold by any number of chemical supply companies. Spectrum Chemical sells 25kg of Progesterone USP for $22563.75. 25kg == 25000000mg, so the cost of bulk Progesterone is 1/10th of 1 cent per milligram. Perhaps bulk levonorgestrel sells for 100x as much as Progesterone USP powder. That means 1.5mg levonorgestrel costs the emergency contraceptive manufacturers at most $0.15 (but probably on the range of $0.0015-$0.015). Many pharmacies sell generic birth control prescriptions for $9/28 pills, or $0.32/pill. The difference in cost between the .15mg levonorgestrel in a regular birth control pill and the 1.5mg levonorgestrel in a Plan B pill is certainly no more than $0.15. The plan B pill therefore cannot possibly cost more than $0.47 to manufacture – $0.05 to $0.20 per pill is more likely.

With these costs, a reasonable retail price for the generic version of ‘Plan B’ is $4, the same as any generic prescription. A reasonable price for the branded ‘Plan B’ would be slightly higher, as is the custom for name-brand vs. generic OTC drugs without patent protection (Bayer aspirin vs. Walgreens aspirin, etc).

Is there some other justification for the $50 “Plan B” retail price, or is it just profiteering?

The main consideration is probably that the drug companies don’t want women using this drug too frequently, as it is not appropriate to throw monkey wrenches into women’s hormonal machinery more often than is absolutely required. But is there another way? Perhaps stores could keep the $50 pill on the shelf, while also offering the $4 version behind the counter. The pharmacist would ask a few questions to make sure the drug is not strictly contraindicated. 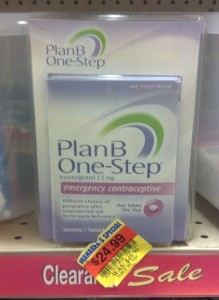 This photo was taken at a grocery store in Phoenix, Arizona. Note the contrast between the retail price of $49.99 and the clearance price of $24.99
Afterpill.com sells their version of “the morning after pill” for $20/pill. This irrefutably demonstrates that at least $30 of the $50 retail price for name-brand “Plan B” goes straight to Wall Street’s profit machine. Afterpill’s product uses Levonorgestrel, the same multiple-schlerosis causing FDA-approved drug as is used in name-brand Plan B.

It is profoundly evil to use poor women’s fear of maybe/possibly becoming pregnant to sell them a few penny’s worth of ingredients for $50.